Dr. Carly Dokis, associate professor of anthropology, received an Insight Grant from the Social Sciences and Humanities Research Council (SSHRC) for her research project, Taking Care of Our Stories. The project will receive a total of $228,351 over five years and will be carried out in partnership with Randy Restoule of Dokis First Nation and Adrienne Dokis, director of the Dokis Museum. The NU News sat down with Dr. Carly Dokis and Randy Restoule to learn more about their study.

Can you tell us a bit about your study Taking Care of Our Stories?

Dr. Carly Dokis: The project stemmed from long-standing collaborative work that Randy and I have been doing together since about 2012. Initially, we were looking at experiences of water quality and water security in Dokis First Nation. We were interested in learning about peoples’ relationships with water, and people often expressed those relationships in stories. As we were working on the initial project, we began to talk with people who wanted to share stories and experiences of their lives and community, so we extended this story work in our current project called Taking Care of our Stories.

The project involves sitting with people from the community and inviting them to tell us a little bit about themselves, their lives and their experiences at Dokis. Before the pandemic, we were recording the interviews on video at the museum. People sit with us and tell us a story about their lives. We begin by asking people to introduce themselves and follow that with questions like “When and where were you born?”, “Who were your parents?”, “What did they do for a living?”, “What kind of things did they teach you as a kid?” and “What were some other things you did for fun?”. We kind of prompt them and invite them to tell us about their lives and experiences with the intention of recording their stories and placing them in a repository in the Dokis Museum.

Why is this research important?

Randy Restoule: Going back two generations to my grandfather, in a series of interviews, he speaks of a time when if they were caught fishing across the bridge from our community, they would be charged for poaching. They had no recognition of their treaty rights by the province. It is stories like this that need to be shared, be preserved and be told to the future generations and partners to recognize. It’s important for the Ministry to understand the conflict and resentment today that we’re experiencing. We have a solid understanding of our treaty rights today, but just two generations ago that did not exist.

Dr. Carly Dokis: I’ll situate myself a little bit. I am originally from Treaty 7 Territory, my ancestors having moved there from Ireland and Norway by way of the United States. My husband is a member of Dokis First Nation, and we moved to this territory in 2008. I’ve spent a lot of time at Dokis and I have been listening to people’s stories, even before the project. My father-in-law, Mel Dokis, would tell me about the times his father (my children’s great grandfather) would drive a barge from Sturgeon Falls to Dokis and how he would sneak on at night so that he could go with his father. These stories are so rich and really speak to me of pride, a strong sense of identity and a strong sense of community.

The project is built on the relationships that we share with one another so that we can meet the needs that the community has identified. The foundations of the research project are the partnerships and relationships with the people who are doing the work and the storytellers. These stories are cherished memories that people are offering to share, so respecting the time that people are taking to tell those stories and how they want them to be used is also really crucially important.

What do you hope to accomplish with this research? 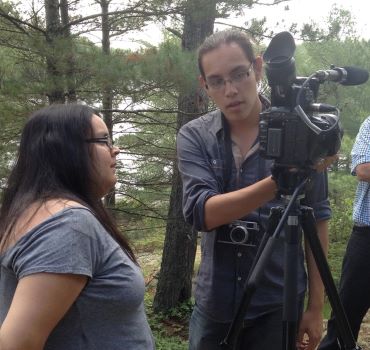 Dr. Carly Dokis: Relationships are at the heart of what we’re doing, so we want to ensure that we’re doing our work in a way that respects community values on how to appropriately care for stories and how to appropriately share them. That’s really important to us. We’re coming up with a research protocol for this project that will ensure that the community member stories are protected and used in ways that respect their jurisdiction over their stories. The stories will be housed on an internal server in the community and the community will decide who gets to have access to them and how they are used.

What are the long-term goals of this research project?

Dr. Carly Dokis: The main priority is listening to people’s stories and recording them for future generations of people at Dokis First Nation. Then, depending on people’s level of comfort, those stories could be shared outwards. With storytellers, we will produce digital stories based on the interviews. Some of these stories will be installed in an exhibit at the Dokis Museum. We are also hoping to develop a longer and more community-oriented story. It will be more of a feature-length film that will interweave people’s stories together. Depending on people’s level of comfort for sharing their stories, we could potentially show them at a community screening, more widely in North Bay or we could have travelling exhibits at different museums.

What has influenced/inspired you to conduct this research?

Randy Restoule: From a Dokis perspective, a lot of the work that I’m primarily involved with is historical research in terms of some of our land claims and traditional knowledge. It became apparent to me of the need to be able to preserve the community knowledge.

How will this SSHRC funding support your research?

Dr. Carly Dokis: The SSHRC funding has allowed us to expand the scope of our project. It has been flexible enough for us to be able to involve a larger amount of people in the project. A priority for us is to hire community-based researchers and work alongside local youth in order to involve them in the project. It has also allowed us to create space for other community members to become interested in and participate in the project. We are able to have events like community meals and exchanges where we are able to ensure that people know what it is that we are doing and keep them informed of how we are proceeding. The SSHRC funding has really allowed us to be able to do that.

With this funding, we are also able to support the community in developing their own research policy that goes beyond this project. We’re addressing questions around ethics within the project itself, but many Indigenous communities, Dokis included, have a number of different researchers that are coming in and wanting to work with the community. By supporting Dokis to develop a research policy, they are able to make use of the work that we are doing beyond this project so that they can develop their own priorities around research ethics and how researchers engage with the community.

Randy Restoule: Without the SSHRC funding, we wouldn’t have the resources available to use to be able to conduct the interviews or have the professional training and data management. In terms of the equipment, we wouldn’t have been able to purchase an internal server to be able to store and preserve all of this information. This funding allows Dokis the capacity to be able to interview the individuals and have an offline server that is available at the museum to preserve information. The funding also helps us to contribute resources to be able to develop the research ethics policy for the community.