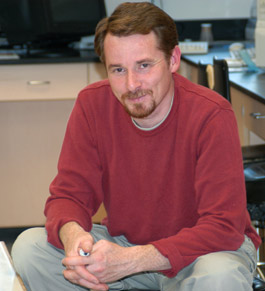 Continuing the search for the fountain of youth: examining free radicals in the aging process and methods to increase longevity

Assistant Professor of Biology, Dr. Tony Parkes’ primary research interests involve the genetics and molecular biology of aging. Parkes is studying how aging is affected by oxygen free radicals, toxic forms of oxygen generated as a byproduct of normal cellular metabolism. Oxygen free radicals are unstable molecules that can react quickly with other atoms and molecules, causing damage to living tissues. It is the accumulation of such damage that is believed be the root cause of the aging process, and lead to specific age-related diseases as well as general functional decline. Parkes discovered that the motorneuron is a lifespan-limiting tissue in the model organism, fruit flies (Drosophila melanogaster). As well, he found that a particular enzyme which metabolizes free radicals (SOD1) performs a critical function in protecting this tissue. This work has shown that overexpressing that enzyme in the motorneurons of fruit flies increases longevity by 40 per cent.

The questions Dr. Parkes is now turning to are: How does protecting the motorneuron alone from free radicals extend the lifespan of the entire organism? Is the motorneuron a lifespan limiting tissue that represents the "Achilles heel" in aging? Or does it in some way regulate the rate of aging in other tissues? Dr. Parkes is also investigating the various biological functions of oxygen free radicals by analyzing mutants that lack the SOD1 enzyme. Such mutants have a dramatically reduced lifespan and display a complex pathological syndrome reminiscent of many age-related diseases in humans. Each of the disorders shown by the mutant animals serves as a unique window to understanding the roles of free radicals in basic physiology. Ultimately, Parkes’ goal is to define the tissue-specific and physiological basis of each disorder in terms of how oxidative stress might be interfering with normal cell and tissue function. Using SOD1 mutant Drosophila as a model of chronic oxidative stress will provide clues to the mechanisms of aging and age-related disease in other organisms, including humans.