Enji giigdoyang, the Office of Indigenous Initiatives, welcomes students, staff, faculty and community to engage in a series of talks, workshops, and film screenings by Indigenous knowledge holders, professionals, writers, scholars, artists, and filmmakers. Please join us for one or many sessions throughout the week. Registration is required. 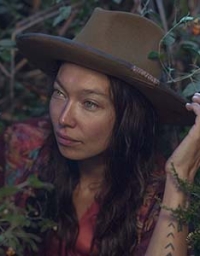 Sarain Fox is a Canadian Anishinaabe activist, broadcaster and filmmaker. A storyteller at heart, Sarain combines various mediums to amplify the voices of her people in hopes of creating meaningful dialogue between Indigenous and settler communities.

Sarain has built her career at the cross-section of activism and media. In 2020 she founded Land Back Studios a production company focused on authentic storytelling in new-media, television and film. She is most noted for her 2020 documentary film Inendi, for which she received a Canadian Screen Award nomination for Best Host or Interviewer in a News or Information Program, and currently runs on CBC GEM.

You’ve seen Sarain in the larger than life billboards & videos for Sephora’s ‘We Belong to Something Beautiful’ initiative, and in 2021 she took a leadership role as a consultant behind the scenes too for their National Indigenous History Month Campaign, to amplify the voices of Indigenous Peoples in Canada, while paying homage to their knowledge, wisdom, diverse strengths, and teachings. As an Indigenous Entrepreneur, AMEX Canada partnered with Sarain for the launch of their Blueprint campaign to support BIPOC Businesses. 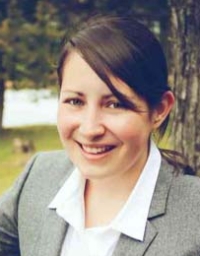 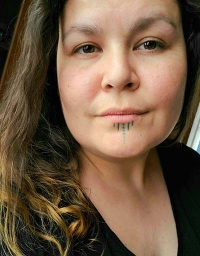 Aanin! Waabizhaawshkwenang ndizhnikaaz. Amanda ndizhnikaaz zhaagaanaashmowin. Nbisiing ndoonjibaa, Anishinaabe kwe mina Kanien'keha:ka n’daw. I come from a long line of Anishinaabe kwe from Nipissing First Nation, where I reside with my husband and two children. I also have paternal roots in Kahnawake Mohawk Territory. I am an active member of my home community, helping to improve wellness and encouraging an interest in cultural arts. I currently hold the position of School Wellness Lead at Nbisiing Secondary School, on Nipissing First Nation. My work with the students focuses on mental health and addictions, but through a cultural/traditional lens. I do my best to provide creative and cultural outlets for students and conduct my work based on our Four Direction Teachings. I am also a traditional artist, working primarily in sewing, beadwork and leather projects. I have been learning from NFN artist Dan Commanda, and Brenda Lee (a Cree artist from Mascwacis, Alberta) for 13 years. Their teachings have given me the skills and confidence to create beautiful beaded pieces over the last few years. I have also co-facilitated workshops with both of them, and now am facilitating my own arts workshops. 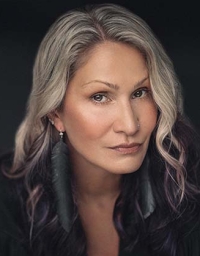 Dr. Jules Arita Koostachin is an InNiNew IsKwew (Swampy Cree woman) and a band member of Attawapiskat First Nation located in what is now called northern Ontario.  Jules was raised by her Cree speaking grandparents in Moosonee, as well as in Ottawa with her mother, a residential school warrior. She is a graduate of Concordia University’s Theatre program and Ryerson University’s Documentary Media Master’s program. In 2010, Jules was awarded an Award of Distinction and an Academic Gold Medal for her thesis documentary film Remembering Inninimowin. She is the mother of four incredible sons, a published writer, performance artist, an academic and an award-winning filmmaker. She completed her PhD with the Institute of Gender, Race, Sexuality, and Social Justice program at the University of British Columbia with a focus on Indigenous documentary practices. Jules is represented by The Characters Talent and Lucas Talent in Vancouver, and she is the voice of Layla (Molly’s mom) on the award-winning animated series Molly of Denali. 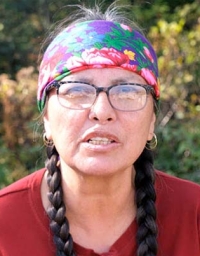 Brenda Lee is a Plains Cree First Nations woman from the Treaty Six Territory, born and raised in Maskwacis Alberta. Brenda was fortunate enough to have spent her formative years with her grandmother: Nancy Oldpan (Roasting), who taught her how to sew, bead, harvest and learn the cultural teachings. Brenda developed the interest and knowledge in these art forms exploring her culture through art.

Brenda’s focus is on restoring our cultural heritage through the arts, specializing, and working primarily within the cultural arts programs. She can deliver a step-by-step instructional workshop to develop a superior quality product, to expand and enhancing creativity and reclaiming our pride as First Nations peoples. It is important for Brenda to teach individuals who are willing to learn about the creation of the product and what it takes to construct it.

Brenda resides in the beautiful Nipissing First Nation located in Ontario and continues to instruct with natural and contemporary materials and is becoming a sought-after Artisan. 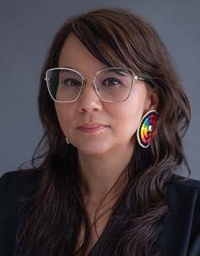 Tanya Lukin Linklater’s performances, works for camera, installations, and writings centre histories of Indigenous peoples’ lives, lands, and structures of sustenance. Her performances in relation to objects in exhibition, scores, and ancestral belongings generate what she calls felt structures. Her work has been shown at the 2021 New Museum Triennial, San Francisco Museum of Modern Art, Chicago Architecture Biennial 2019, Art Gallery of Ontario, Remai Modern, Winnipeg Art Gallery and elsewhere. Her first collection of poetry, Slow Scrape, was published in 2020 with a second printing in 2021. In 2021 Tanya received the Herb Alpert Award in the Arts for Visual Art. Tanya studied at Stanford University (A.B. Honours), University of Alberta (M.Ed.), and is doctoral candidate at Queen’s University in Cultural Studies. Her Alutiiq homelands are in the Kodiak archipelago of southwestern Alaska. 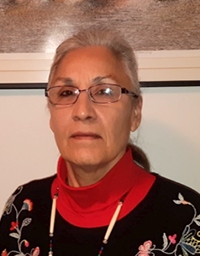 Leona Stevens lives within her home community the First Nation of Mississauga #8 Ontario, located approximately 170 kms west of Sudbury. She is a grandmother to nine and a great-grandmother to three with a fourth one on the way.

Leona has experienced an incredible healing and learning journey spanning several decades. She has dedicated herself to re-claiming the sacred Teachings, Ceremonies, and Healing practises of the Anishinabe Midewin of the Three Fires Society. She has earned extensive knowledge of women’s ceremonies.

Leona is a very kind and caring person and she generously shares her skills and knowledge base. She works tirelessly for the betterment and healing of others.

Her Spirit name is Ogiimah Quay. She is a member of the Bear Clan family. She is 4th degree Midewin and is recognized as the Chief Women of the Three Fires Midewin Lodge. 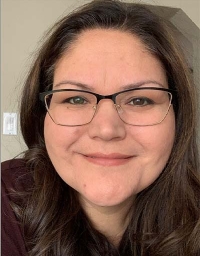 Lorraine Sutherland is a proud member of Attawapiskat First Nation. She holds an MA in History from Nipissing University. Through learning and teaching experiences, she re-examines, re-thinks, and re-works curriculum to include and support Ininiw (Cree) ways of knowing and being using tipaachimowin/tipachimowina (Story/Stories, Narrative(s), Lived Experience(s)). 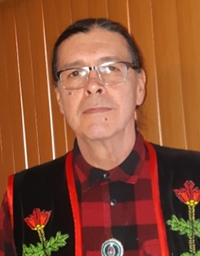 Wes Whetung originates from the First Nation community of Curve Lake Ontario. He resides in the community of Mississauga #8 with his wife Leona Stevens.

Wes has pursued a long and productive career of social work and has consistently engaged in helping improve the quality of life for First Nations people.

His training is extensive, but he openly acknowledges his most valuable skills are derived from the Sacred Teachings, and ceremonial healing practises of the Anishinabe Midewin. He has actively supported the Three Fires Society Midewin Lodge for 40+ years.

Wes is a highly respected ceremony maker, Knowledge Keeper, teacher, and helper. He is currently providing cultural resource services to the Correctional Services of Canada, working with Indigenous men at Beaver Creek Institution.

His Spirit name is Nowakwegeesis and he is a member of the Moose clan family.