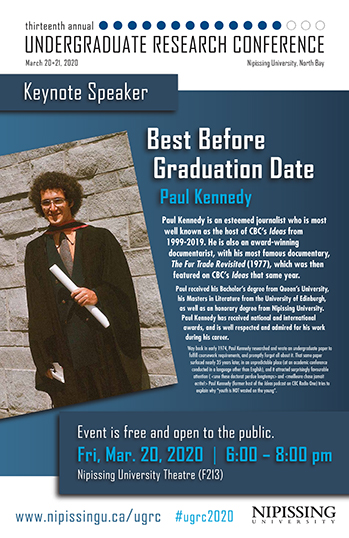 This year’s conference has been cancelled

Paul Kennedy is an esteemed journalist who is most well known as the host of CBC’s Ideas from 1999-2019. He is also an award-winning documentarist, with his most famous documentary, The Fur Trade Revisited (1977), which was then featured on CBC’s Ideas that same year.

Paul received his Bachelor’s degree from Queen’s University, his Masters in Literature from the University of Edinburgh, as well as an honorary degree from Nipissing University. Paul Kennedy has received national and international awards, and is well respected and admired for his work during his career.

Way back in early 1974, Paul Kennedy researched and wrote an undergraduate paper to fulfill coursework requirements, and promptly forgot all about it. That same paper surfaced nearly 35 years later, in an unpredictable place (at an academic conference conducted in a language other than English), and it attracted surprisingly favourable attention ( <une these doctorat perdue longtemps> and <meilleure chose jamait ecrite!> Paul Kennedy (former host of the Ideas podcast on CBC Radio One) tries to explain why “youth is NOT wasted on the young”

Event is free and open to the public.